With International Women’s Day tomorrow, how do law firms in New Zealand fare when it comes to true gender equality and what can be done to reach this goal?

A mid-year check by the New Zealand Law Society in June 2015 found that while 59.4% of employees within legal firms were female, this number dropped dramatically when moving up the career ladder. In fact, women held a mere 26.4% of partner and director roles at the time of the study.

Cathy Quinn, chair of MinterEllisonRuddWatts (MERW), concurs with these statistics. According to their latest legal data, the percentage of female partners at the country’s top legal firms ranges between 14 and 28 per cent (as can be seen below). 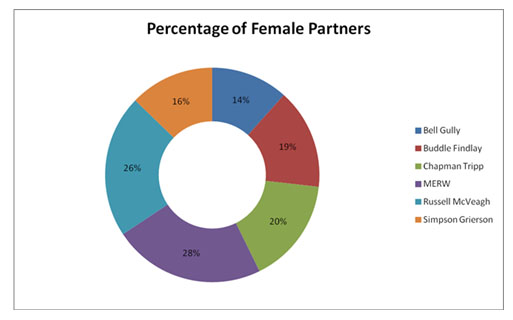 Quinn says that flexibility is the key to tackling the issue of gender equality and increasing the number of women in senior positions.

“This is the way of the future, not just for women, but all of us,” she said. “Flexibility around where work is carried out and being able to more easily blend work schedules with other commitments will benefit everyone, including women.”

This will gradually reduce the negative bias around flexibility that currently exists in NZ law firms. This bias means that those working flexible hours are often assigned less challenging work, she added.

“Young females coming through need to see that there isn’t just ‘one way’ to succeed. Instead, they will see different types of women resolving the issue of blended responsibilities in different ways. It is also important that these women are also open to mentoring those more junior.”

Of course, there needs to be support stemming from the top of the organisation with leaders walking the talk and taking ownership of diversity initiatives and all required cultural change.

When asked about pay equality between male and female lawyers, Stacey Shortall, partner at MERW, said that there was a real lack of statistics on pay in the NZ Legal industry – a shortcoming which needs to be fixed.

However she said that there were some ways in which women could start lagging with regards to their salaries and other benefits.

“Women taking time out of the profession to have children can mean they fall behind in pay reviews and promotions,” she said. “If this is the case, then on average there will be pay inequality.”

To rectify this problem, law firms need to increase discipline during remuneration processes and include a step that specifically analyses proposed salaries through an equity lens, she said.

In the move towards gender pay equality, it was important that remuneration be determined based on merit/results as opposed to mere process, eg actual effectiveness as opposed to the number of hours worked.

Stepping up to the challenge

Silvana Schenone, partner at MERW, highlighted a number of other ways in which true gender parity could be reached in NZ law firms.

“Demand more from the firm’s leadership,” she said. “All those at the top, including men, should show public support for policies, encouraging their staff to take advantage of alternative work schedules, family-related benefits and/or bono work and ensuring there isn’t a ‘price to pay’ for them having done so.”

Firms should also set targets and benchmarks so as to monitor progress against the targets set. The old adage, ‘What gets measured, gets done,’ applies here Schenone added.