The country’s top law firms have made a historic year for the Winneke Cup a success.

For the first time in the history of the sporting festival and fundraiser for law firms, which has been held annually since the early 1990s in Melbourne, women’s Australian rules football was a featured competition in the event.

This year’s host, Corrs Chambers Westgarth, came up with the idea to hold a women’s footy competition during the event, which was held at the Albert Park Sports Precinct.

“Corrs was very keen to organise and run the first women’s Australian rules game at the Winneke Cup, and we’re confident the success of the exhibition match means it could become a regular feature of this event,” said Corrs’ Georgia Westbrook, one of the organisers of the 2017 Winneke Cup. “It was great we could come together for a day of sport and were able to raise money for not-for-profit organisation, Ladder.”

Funds raised by the 2017 Winneke Cup will be used by Ladder to combat youth homelessness across Australia.

The Winneke Cup honours John Winneke, who was a judge of the Supreme Court of Victoria and a former president of the Victorian Court of Appeal. 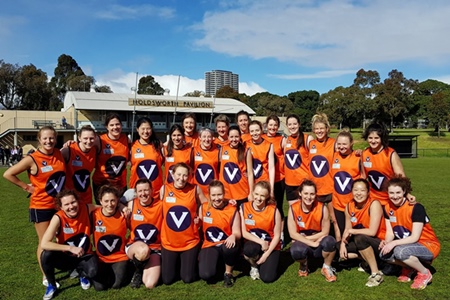