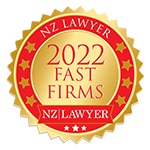 Jump to winners | Jump to methodology

Achieving strong growth in a challenging year is no easy feat — and for New Zealand’s law firms, the past several years have been undeniably tough. The COVID-19 pandemic resulted in a drop in demand for advice across some practice areas, and the increased presence of in-house counsel among large corporates has put further pressure on the legal sector.

According to IBISWorld, the market size growth of New Zealand’s legal sector has dropped by 0.6% per year on average throughout 2017–22. By the end of this year, market size is expected to increase by 0.7%, and while the upward trend is encouraging, growth projections are clearly conservative.

Despite this tough environment, NZ Lawyer’s Fast Firms 2022 have smashed all expectations when it comes to growth. With an average revenue growth rate of 44.6% compared to financial year 2020-21, the level of progress the Fast Firms have achieved can’t be overstated.

Now in its second year, NZ Lawyer’s Fast Firms report aims to highlight the law firms that have been performing exceptionally well throughout the last 12 months. The research took into account the growth rate of fee earners, partners and revenue, as well as new offices and other significant milestones. This year’s report highlights some of the unique and creative ways that New Zealand’s top-performing firms have driven their growth.

“We’ve seen a lot of growth in our property and construction practice, and that’s largely to do with the way that the economy has been going”
James Nolen, K3 Legal

Charting a path to success

While all of this year's winners have achived a high level of growth, each law firm has taken a different route to success. Some have tapped into new and underserviced markets or expanded into new practice areas, while others have looked overseas for growth opportunities.

One such Fast Firm is K3 Legal, which saw an 8.4% increase in revenue, boosted several of its practice areas with new lawyers, and strengthened its family, criminal, and corporate and commercial offerings.

This is a trend in the New Zealand market noticed by Damian Hanna, associate director - legal at INSIDE Recruitment & Consulting. “There is continued demand for lawyers with experience in corporate/commercial and banking and finance matters,” he says.

According to director James Nolen, a growing reputation and increased brand awareness have also played a role, with a larger number of clients starting to look at the relatively new K3 as a strong market player.

“Our growth has really been the culmination of several years of work,” Nolen tells NZ Lawyer. “A couple of years ago, we realised that we were a little bit short on our corporate and commercial offering, and we wanted to really round out that service. We brought in two new directors around 18 months ago, and they’ve now fully transitioned their practices into K3 — so that’s added another area that we have a genuine specialty in.”

“We’ve also seen a lot of growth in our property and construction practice, and that’s largely to do with the way that the economy has been going,” he explains. “Property prices are booming and there’s a lot of development happening, so we’ve been able to really tap into that.”

Nolen adds that the firm has also invested significantly in establishing and promoting its brand.

“We’re only five years old, so the first few years were all about brand establishment. But now that we’re becoming more well known, we’re starting to get more work coming through as a result of the reputation we’ve built.”

Construction has been a popular growth area among law firms this year, with many of the Fast Firms benefiting from the ongoing flow of construction work. Russell Legal has gone a step further and launched its own specialist construction law brand — Axis Construction Law — in September 2021. It’s a major reason why the firm’s revenue has grown by 129% in the past year. According to managing director Scott Russell, there is a “real need for specialised advice and guidance” in the construction sector at the moment, and with some potentially troubled waters ahead, that need isn’t going anywhere anytime soon.

“One of our directors is currently studying towards a Masters of Construction Law at Melbourne University, and he observed that the current tightening of economic and property cycles has caused trouble for a number of his construction clients,” Russell says.

“This has been the result of poor contractual documentation and poor management of projects. We’ve identified a real need in the construction industry for guidance in troubled waters, and we’ve seen a huge uptake of our specialised construction service.”

“The positive response we’ve had from construction firms has reinforced that launching this brand was absolutely the right thing to do,” Russell adds. “We’ve focused a lot on growth markets like construction and regulatory advice, and as a result, our litigation team has been breaking new ground.”

Again, underlining the wisdom of the 2022 Fast Firms, Hanna echoes their analysis of the market. He explains, “There is a huge demand for lawyers with experience in employment law probably as a result of the effects and aftereffects of the COVID pandemic in the workforce. Similarly, litigation lawyers are in higher demand now than previously, and there is increasing interest in lawyers with specialist expertise in areas such as environmental and financial services.”

“We’ve focused a lot on growth markets like construction and regulatory advice, and as a result, our litigation team has been breaking new ground”
Scott Russell, Russell Legal 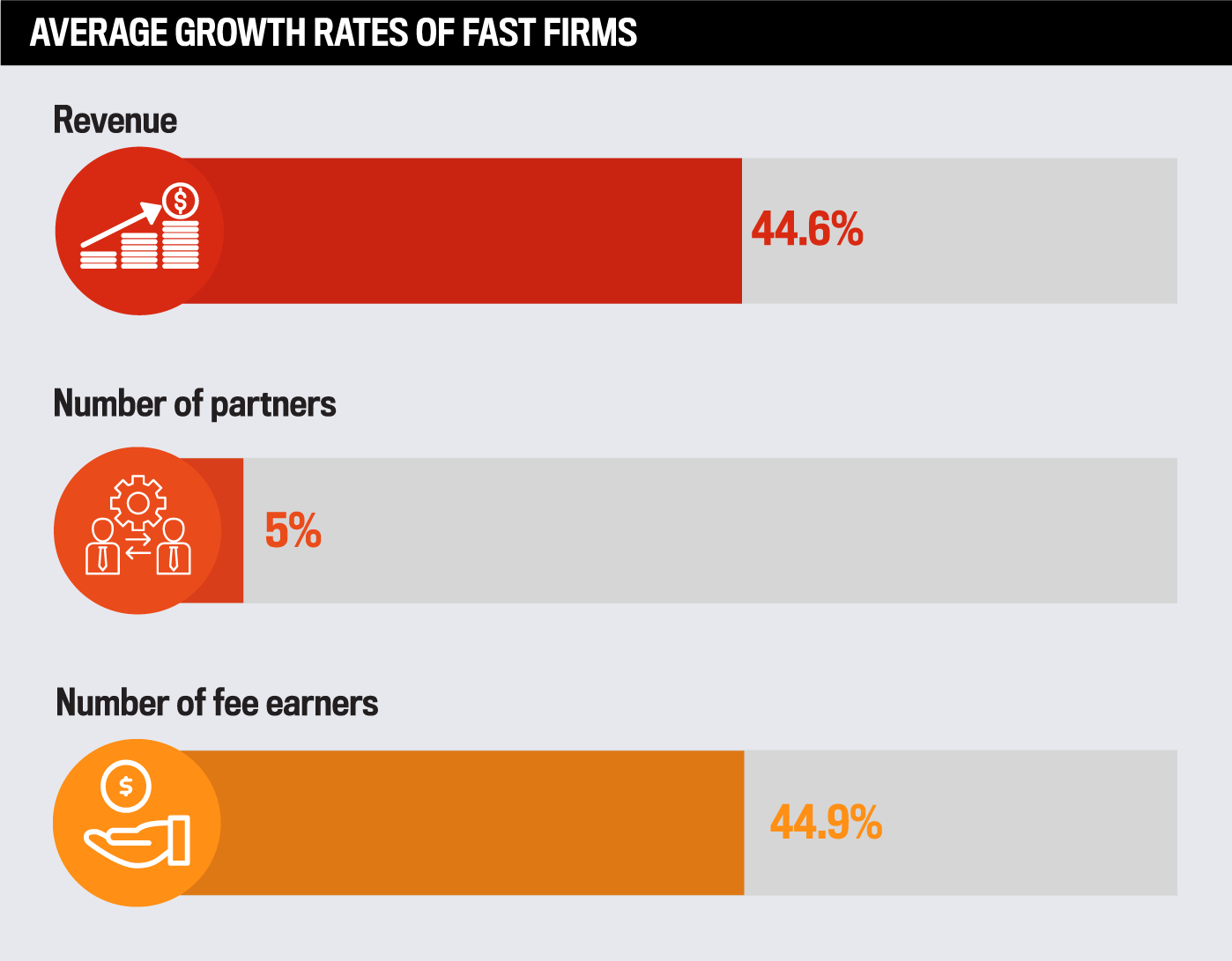 In addition to growing team numbers and practice areas, many of this year’s Fast Firms have also opened up new offices, both domestically and overseas.

The South Island has seen a particularly high level of new firms setting up shop. Wynn Williams opened a new office in Queenstown (and added 14 fee earners across the firm, a 27% rise), while Todd & Walker Law expanded its Wanaka team from three to seven. Copeland Ashcroft expanded its reach into Christchurch, where it has appointed a specialist in immigration law to provide immigration advice and support.

K3 Legal has been expanding its reach overseas, and one of its directors is in the process of opening a Hong Kong office. Nolen emphasises the significant potential in the dispute resolution and mediation space in this region and says that if the practice is successful, it will open up the opportunity for further expansion. The team has also expanded its international expertise domestically with the strengthening of its Korean-speaking team, which compliments its existing team of Mandarin speakers.

“One of our directors, Margaret Chen, saw an opportunity to create a new practice in Hong Kong in the mediation and disputes space, so we’ve been very supportive of her setting up a practice there,” Nolen says. “If that goes well, then that office has the potential to grow and attract more people.”

He explains that a large volume of business is coming in from China and many migrants are more comfortable dealing with lawyers who speak their native language.

“That’s been a huge focus for us — we still have a number of Mandarin-speaking lawyers that service the Chinese immigrant population, and we felt there was a similar opportunity there with Korean speakers. That’s been headed by one of our up-and-coming stars, and we’ve been steadily adding more Korean-speaking lawyers to support her in her practice.”

“There is a huge demand for lawyers with experience in employment law probably as a result of the [effects of the] pandemic in the workforce. Similarly, litigation lawyers are in higher demand now … and there is increasing interest in lawyers with specialist expertise in areas such as environmental and financial services”
Damian Hanna, INSIDE Recruitment & Consulting 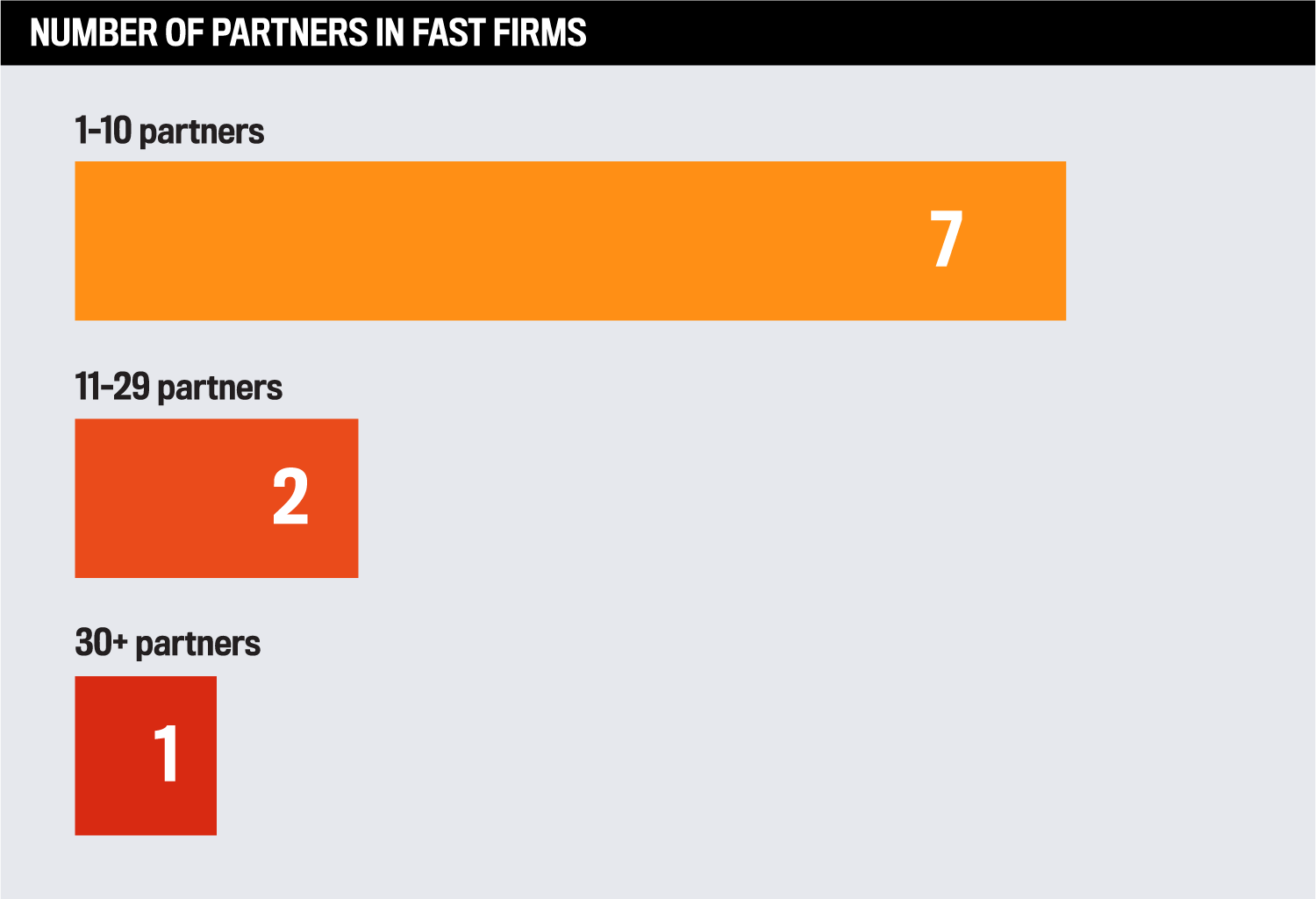 As lawyers look ahead to the next 12 months, there is no doubt that we can expect to see further shifts in the market. Some practice areas will see demand explode, while others might find their workload reduced.

To be a Fast Firm, legal practices need to have their finger on the pulse of the market, and to anticipate where the next boom in demand will come from. Russell Legal managing director Scott Russell says that construction will no doubt continue to be a profitable sector, particularly in the dispute resolution space, as the industry starts to hit some troubled times.

“We have noticed a significant increase in front- and back-end construction matters over the last year, and the signs are that this will continue,” Russell says.

“We have noticed that delays, disruptions and cost escalations over the last couple of years have led to construction participants fighting over tighter margins, as well as construction contracts that are no longer fit for purpose. Because of this, we see the disputes area of construction law providing one of the biggest growth opportunities in the legal industry over the next year.”

K3 Legal’s Nolen also points out a likely increase in demand for restructuring and insolvency advice. While the workload has been relatively low in this area over the last few years, dips in the economy may well bring it rushing back — something he says will be exciting for lawyers specialising in this area.

“This is an area that I’m personally quite excited about, and is one of my specialties,” he says. “It’s been pretty quiet for the last five years while the economy has been quite buoyant. But as New Zealand grapples with rising interest rates, falling house prices, and as borrowing gets harder, I do think we’re about to see more demand here. Whatever happens, the coming 12 months is sure to be an exciting time for the legal industry.”

Recruitment is going to be a key element for any firm wanting to step up their game. “The law firms who will thrive will be the ones who are transparent and forward thinking in their approach. They will be genuine in their desire to support and train their staff and will put the welfare of their staff at the centre of everything they do,” explains Hanna.

“Lawyers are not afraid to work hard and put in long hours, but there is a need for that effort to be recognised and rewarded, and those that do this will find staff easier to retain as well as to attract.”

NZ Lawyer invited submissions for its 2022 Fast Firms report on 27 June, as the publication sought to recognise the fastest-growing law firms in New Zealand.

The research team asked firms to list their revenue and headcount for the 2021–22 financial year, in addition to any other growth milestones they wanted to highlight. Global firms were instructed to focus only on the figures related to their New Zealand operations.

The NZ Lawyer team then evaluated the nominations to determine which firms experienced standout growth in revenue, partnerships, general headcount, and expansions. A total of 10 firms made the final list of Fast Firms for the year, comprising both smaller boutiques and large global firms. All of these firms have demonstrated their resilience and cemented their strong positions in the New Zealand legal market.