After a decade at the helm, the firm’s eighth chairman and CEO is stepping down

Duane Morris will have a new chairman and CEO beginning January next year.

The international firm has announced that Matthew A. Taylor will become its ninth chairman and CEO, replacing John J. Soroko, who has been at the helm for a decade. Soroko, 66, will focus full-time on his litigation, appellate, and mediation practice and his role as chairman emeritus of the firm.

“I am extremely pleased that Matt Taylor will be taking over the leadership of Duane Morris,” Soroko said. “Having discussed this transition within the firm over the past year, I know, as do all our partners, that Matt will do an outstanding job leading Duane Morris. After 10 years as chair, I do see this as a good time for me to return to the full-time practice of law, and I really look forward to doing that.”

Soroko said that Taylor has the leadership and people skills to keep the firm moving in the right direction. Taylor has been part of the firm’s executive committee for the last eight years.

“Because Matt has so successfully managed a practice group of 300 trial lawyers, he is particularly well prepared to lead our Firm. I know that Matt and Tom Servodidio will be a very effective team,” he said.

Taylor said that his focus is to continue the success the firm has achieved since he joined a senior associate in 1997.

“It is humbling to be asked to lead such a great firm that has been so successful for well over 100 years,” he said. “We are in a particularly good position to build and strengthen our platform with quality lawyers in many practice areas to better meet our clients’ needs. We plan on taking advantage of those significant assets, and to be smart in how we grow. I see my job as being an advocate for all our current lawyers to expand their practices and also, importantly, to attract new lawyers to further strengthen our firm.”

During his stint as chairman and CEO, Soroko oversaw Duane Morris’ growth to 750 lawyers. He led the firm as it expanded in Philadelphia, New York, Miami and Los Angeles, and opened in Silicon Valley. Soroko also oversaw the opening of the firm’s joint venture in Singapore, Duane Morris & Selvam. During his leadership, the firm also established operations in Taiwan, Shanghai, Myanmar, Oman, and Sri Lanka.

Taylor said he has some big shoes to fill, but is looking forward to the task.

“Most of the hard work has been done by the talented leaders at the firm who preceded me. I will have the difficult task of following John Soroko, who for 10 years has guided our firm with a steady hand, even through the collapse of the financial markets,” he said. “Under John’s very able leadership, the firm has grown steadily in revenue and profitability, during a time when many firms could not say the same thing. It will be my job to build on what we have today and to make it even stronger. I am very eager to take on that challenge.” 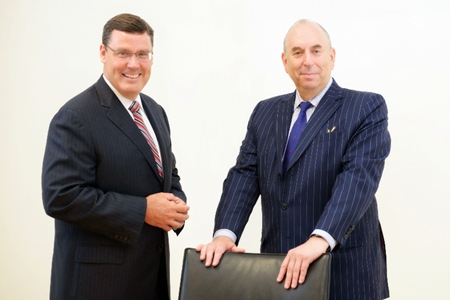