Breaking down the ‘Berlin Wall in law’

Regional Australia has always been a major part of Craig Osborne’s life. Born in Sydney, he then lived in many country towns in regional New South Wales, some quite remote. Regional Australia is also where he was influenced to become a lawyer at the tender age of 10, and is where he built his career that now sees him managing an established law firm and a thriving legal process outsourcing business.

He remembers Fred Duncan, a next door neighbour in Wollongong, who returned to Australia after surviving being a prisoner of war in Changi. Fred, he says, was the man who nudged him onto the path to becoming a lawyer.

“He would talk to me about fairness, and lies, and things like that. I’d hit my soccer ball or rugby league ball over the fence and kill his tomatoes and he’d make me argue why he should give my ball back,” Osborne says. “He wanted me to be aware that when you say or do something, you affect other people. I was only 10 but I understood some of it.”

After graduating with a commerce and law degree from the University of New South Wales, he went straight to a law firm in Wollongong called Russell McLelland Brown, which was then still a small law firm of about 20 people. Now called RMB Lawyers, the 132-year-old firm has around 130 lawyers and staff, and 11 offices across New South Wales. Osborne is currently RMB Lawyers’ managing partner. 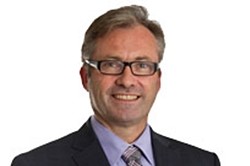 Osborne is also the founder of Unison Outsourcing, the country’s first local legal outsourcing business. Since its launch in 2015, Unison has been getting quite the warm welcome in the industry, he says. The business is also helping break down the “Berlin Wall in law.”

Breaking down the wall
Osborne has been a lawyer in regional New South Wales for 30 years. Over that time, he has come to use the expression “Berlin Wall in law.”

About nine years ago, he started studying the LPO market and model in India and less so in the Philippines. He started to do his own financial modelling for an LPO business in regional Australia and realised it could work.

He and his team then calibrated Unison under the codename “legal dome.” RMB Lawyers sent a whole heap of work to the dome and after 18 months, Unison got accreditation from regulators. From the start, Osborne thought the business could achieve some significant goals.

One was to perform high-quality low-end commercial work for capital city-based corporations and legal firms, and another was to break down the wall so that commercial work would come to regional Australia rather than going outside of the country. It could also help a lot of young lawyers just starting out.

“There are a lot of young lawyers coming out of universities and the jobs that they would normally go to in the city are not available because the work they would normally do is now being outsourced,” Osborne says. “So we could preserve jobs and the economy by keeping the work in Australia and giving people the perfect training ground to later work in a large law firm. Aside from giving a great service for low, fixed fees [at a] high quality and high volume, it’s also a fabulous training ground for people coming out of university to learn how the commercial world works.”

Warm reception
The market has so far been very supportive of Unison, Osborne says. That’s both from looking at how clients have reacted to the services they provide and how the staff feel about working in the company.
He says that Unison attracted business even though it didn’t get to promote its services at first.

“I think we’ve been really lucky. We opened the doors and we were just about to do some marketing and we didn’t get a chance. We were approached immediately by two of Australia’s biggest corporations independent of each other … in August 2015. We’re still working for both of them,” he says.

The work Unison is now doing has also gone beyond what traditional outsourcing firms have been getting.

“A lot of that work has never been sent to a law firm before. It’s work that’s done internally that’s quasi-law that they don’t outsource ever. Some are very menial tasks and some are more sophisticated tasks,” he says.

Businesses particularly love the idea that when they get additional projects, they won’t incur hiring, training, office space, setup, and exit costs, Osborne says. Companies are now also realising that it doesn’t matter what building teams are in Australia, he says.

Unison’s people also appear to be quite happy working at the company, even though there were first-day jitters.

“The staff initially was nervous because we were looking for work and we had just a couple of jobs and it was fairly new to us. But everyone is at a different space now. They’re confident about the work. They like the work. Because they do a range of projects, even though some of the work is quite repetitive, you move from project to project,” Osborne says. “The new lawyers and the law students are very engaged by just about anything. They’re just so keen and grateful to be getting a start working in the commercial world.”

This has made maintaining morale easy, Osborne says. It has also led to an impressive retention rate.

“So far, the morale and staffing has been very easy. I can’t remember the last exit we’ve had. I don’t think we’ve had an exit in the last year, which is phenomenal in law,” he says.

Untapped potential
Osborne sees a lot of potential in regional Australia that isn’t being utilised. That potential could significantly benefit the business of law and myriad other industries, he says.

“The possibilities and opportunities for outsourcing to regional Australia are huge. It’s not just in law, it’s in everything you can think of. It’s in logistics, warehousing, decentralisation of government, software production, accelerator models, and accounting,” he says. “It’s all about the low cost base with high-quality, well-trained people who just choose to live in an area where there’s less commerce.”

Big centres in regional Australia, like Wollongong, offer a lot of incentives, including better “work/life integration.”

“There are very significant and stable employment pools. Unlike capital cities, people in regional Australia are prone to stay in the same job for longer periods, which is excellent and absolutely fundamental to running an outstanding outsourcing business. They get to live in the country where it’s cheaper to live so they get what I call work/life integration. I don’t like work/life balance. I like work/life integration. Work/life balance tends to indicate that people are lazy or don’t want to work hard,” he says.

And Unison is working because of these factors, even though it’s located in areas that some people tend to misunderstand.

“It starts with Unison financially works because we have a much, much lower cost base in regional Australia than in Sydney, Melbourne, Brisbane, Perth, [or] Adelaide. It’s just a fact of life. It doesn’t mean we’re stupid or we’re not good. It just means houses cost half as much, groceries cost less, transport costs less, and we can walk to work,” he says.

Interesting trend
Osborne is actually seeing an interesting trend, with capital city lawyers becoming increasingly interested in moving to regional centres exactly because of those advantages.

“Australia and the world is kind of just realising how much value there is to outsourcing to regional Australia. In many ways, regional Australia haven’t had a lot to shout about over the last 10 or 20 years. Regional Australia loses resources, loses its talented people, [and] loses its services,” he says. “But in the last five years, I’ve noticed something really significant. I’m getting more applications from city-based lawyers who want to come and live in regional Australia than I could have ever dreamed of. They’re at all stages in their career. They’re at the beginning, they’re at the middle and some of them are more towards the end. It’s extraordinary.”

Osborne says that among the last 10 lawyers he’s hired, five have been over 50 and four of them have been from capital cities.

“I’ve not seen this at all before. It’s a new one for me,” he says, adding that housing affordability and planning ahead for retirement could be driving people to regional Australia.

Unison is benefiting from this trend, and the fact that outsourcing suits globalisation, Osborne says.

“I think when globalisation became a phenomenon and then the global financial crisis came along and butted heads with globalisation, everyone thought the answer was to have mergers and acquisitions in capital cities across the world,” he says.

“The outsourcing model absolutely suits globalisation. It is a tremendous assistant to globalisation because you have to become more efficient. You’re working with a lower cost base that seems to become commoditised. You have your fantastic talented workers in your capital city, but you also have a ton of work teams that just down the internet from you…that’s really part of your organisation that you can turn on and off. And you don’t have the costs of leave, sickness, hiring, and exits. It’s consistent flow in your production.”

“I’d say commoditisation of law is the biggest challenge because we’ll all be working with smaller profit margins than we had in the past,” he says. “That doesn’t mean you can’t make a lot of profit. It means you have to change your processes to reduce the cost of production to make a smaller profit margin sing.”

It doesn’t help that some lawyers are averse to change.

“With commoditisation, the major challenge with that is lawyers of all ages refusing to believe that part of their work is becoming commoditised and refusing to even consider the need to change to keep a business and a brand sustainable for the next generation of lawyers. Unfortunately, I’ve seen lawyers day in, day out getting toward the end of their time saying, ‘Why would I change? I’ve done very well, thank you very much. Do I really care what happens to my firm when I go,’” he says. “So it’s commoditisation, getting lawyers to accept it and do something about it, to change processes, and develop your legal brand in those circumstances.”


Related stories:
Regional firm finds success by empowering women lawyers
Here’s how much legal process outsourcing is expected to grow in the next five years