Jones Day has been named the strongest legal brand in the United States, beating Skadden, Arps, Slate, Meagher & Flom, which has held the distinction for the past five years.

“Jones Day hit all the high marks in the areas that matter most – they can offer clients breadth and international reach alongside a consistent performance in terms of quality and service,” said Lizzy Duffy, vice president of Acritas US, which publishes the US Law Firm Brand Index.

Jones Day scored a perfect 100 on this year’s index. Skadden, which scored 97 in the latest index, now sits at the second spot, which Jones Day had occupied for the previous five years. At third is Baker McKenzie, which scored 85 and moved up five places in the ranking.

More than 660 law firms are included in the index, which measures brand strength across six metrics: top of mind awareness, favourability, consideration for top-level deals and litigation, overall usage among U.S.-based clients and inbound usage among international clients. 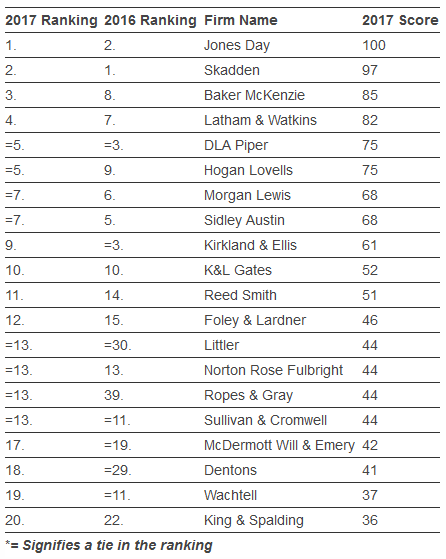